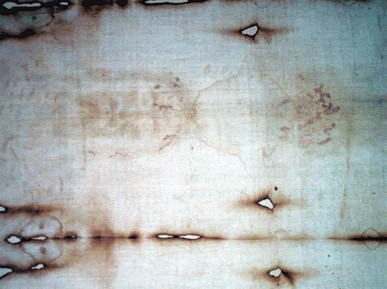 Natural view of the face of the Shroud of Turin, enhanced to make the blood marks more distinct.

Among the many things visible on the Shroud, the so-called â€œblood marksâ€ are the area of most agreement among those for and against the authenticity of the Shroud. What once was up for debate as to whether or not the marks seen are actual blood, is now definite. In 1978, fourteen independent tests for blood were performed from areas all over the shroud. The results: it is definitely blood, human male blood, type AB. While there has been a small voice of people who claim that this is not the case (the main proponent of which is the late Walter McCroneâ€”his view is discussed under the Forgery Theories), their arguments fall short and they can not account for the unanimous agreement of the fourteen tests done. Interestingly, the blood type AB also matches the blood type of the Cloth of Oviedo and the Eucharistic Miracle of Lanciano. While some have theorized that if the blood is truly the blood of Christ, then we will be able to clone him, giving birth to the Anti-Christ, or another Christ. While these ideas are interesting to ponder for fictional stories (of which many were written), scientifically it is unfounded as the blood on the shroud is so old that the DNA has become degraded, thus we can only distinguish its blood type, but nothing further.
No comments found.
Leave a comment
Login  |   Register
© Copyright 2000 - 2021 The Crucifixion and the Shroud     Designed by Savio Designs