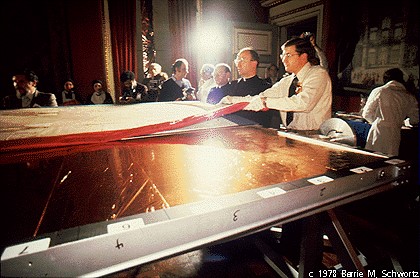 Image of the Shroud being transferred to the specially designed examination table for the STURP tests. Transfer being done by STURP co-founder Dr. Eric Jumper.
Picture Â©1978 Barrie M. Schwortz

The Shroud of Turin has been handled by numerous people throughout the years. Popes, Christians, pilgrims, passer-byâ€™s, photographers, the curious, doctors, scientists, have all dreamed of examining this article which we hold so dear. For years people wanted to have the chance to examine this 14 foot cloth. It was not until 1978 that the opportunity arrived.

In 1978 the church gave the okay for a team of researcher, scientists, and photographers to run tests on the Turin Shroud. The team consisted of forty anxious individuals (thirty-one from the US) eager for their one opportunity to prove this cloth either a fake or true relic. The team was known as STURP, the Shroud of Turin Research Project. The team spent two years planning to the tee the tests and the equipment that would be needed.

On September 29, 1978 STURP departs for Turin, Italy. When they arrive they learn that some of their luggage has been lost and that their equipment has been taken by Italian Customs. On October 5, the truck containing eighty cases of equipment arrive at the Royal Palace. Beginning on October 8th, the team of scientists begins their test until the 13th. STURP was given five days to perform all of their tests. They worked around the clock to accomplish all of their tasks, 120 hours.

While the STURP team did numerous tests most of their work was done when they returned home. They had examined the Shroud face-to-face for five straight days. This was the most the Shroud had ever been examined by human hands. Now was the time to get to the nitty-gritty. During those days of research the team was still unable to come to a conclusion at what had caused the image, but they were led to even greater findings.

Even though STURP could not reach a conclusion as to the cause of the image, their research was groundbreaking. They discovered that no paints, pigments, or stains of any kind were responsible. Before the team was given permission there were already several people stating that they would find the Turin Shroud to be a fake. Some of the members believed that they would be able to walk up and see the brush strokes on the Shroud and leave. However, through extensive study, they realized that this is not the case.

One of the most amazing discoveries came when a light was placed on the under side of the Shroud. When all of the lights were turned off and this one light was turned on they realized that the blood soaked through the Shroud. However, the image of the man of the Shroud did not. The image is located on the upper most fibrils of the cloth.

Their work is still renowned to this day. Every video on the Shroud mentions the rigorous work of STURP. Whenever you mention the Shroud to someone they will speak of STURP. They will forever be known as the team given one of the greatest opportunities in the life of the Shroud.

Click here to see a listing of the United States STURP members.