One of the many mysteries of the Shroud is the fact that we have indeed two separate images: that of the blood and that of the body. With this being said, one must wonder if they were created at the same time and by the same way, or were they created differently, both in time and formation?

This question was never even considered until a Shroud researcher, Dr. Gilbert Lavoie, was puzzled by what he saw when he looked at the face of the man in the Shroud. He couldnâ€™t figure out why the man in the shroud had blood marks in His hair. To help solve this, he did a cut-out of the blood marks in the face region. 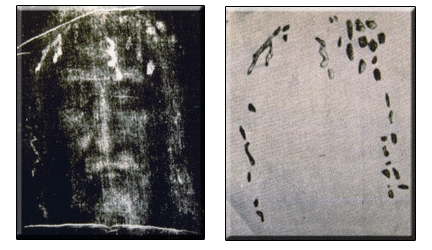 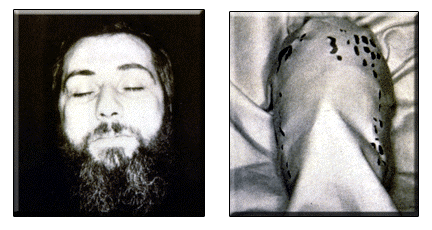 When he did this, he noticed that the blood marks that appeared to be in the hair on the Shroud were actually caused by blood being on the sides of the face. When the cloth was over the face it picked up these blood marksâ€”the blood soaked into the cloth.

Above: Blood marks painted on Dr. Lavoie's assistant from where they
would be in relation to the blood marks on the Shroud of Turin.
Pictures Â©Dr. Gilbert Lavoie.

When the cloth is laid flat, and the body image over it, the blood marks appear to be in the hair. 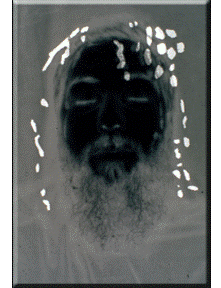 The blood marks of the face, as they appear when the cloth is flat, superimposed over Dr. Lavoie's assistant.
Picture Â©Dr. Gilbert Lavoie.

Another blood mark also puzzled him, the blood mark seen off the elbow. He couldnâ€™t understand why there was a blood mark so far off the body image. 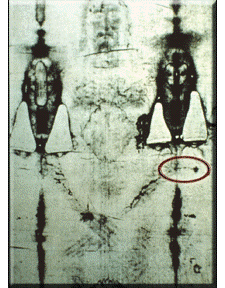 Natural Picture of the Shroud of Turin showing a negative image. The blood mark off the left elbow (the right elbow in the above negative picture) is highlighted.
Picture Â©Dr. Gilbert Lavoie.

He made a tracing of this blood mark and placed it over his sonâ€™s body. 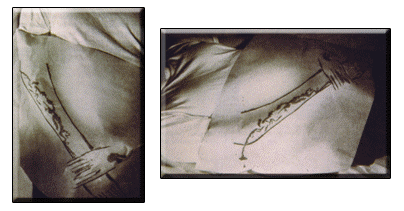 He realized that this blood mark was caused by blood that actually trickled down the arm while it was in the crucifixion position. This blood would then pool underneath the arm and fall off. When the body was laid in the tomb, and the cloth placed over it, the cloth touched this underarm area absorbing the blood. When the cloth is laid flat and the body image is seen over the blood marks, it appears to be off the body image area. 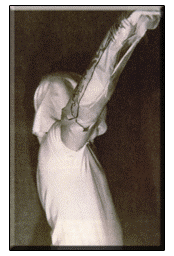 Picture of Dr. Lavoie's Assistant with his tracing wrapped around the arm in the crucifixion position.
Picture Â©Dr. Gilbert Lavoie.

This process in which the blood marks on the shroud were made is called a contact process, a process by which the cloth comes in contact with the blood, absorbs it, and it leaves its mark on the cloth. Many have assumed that if the blood is formed by a contact process, then perhaps the body image is also created by the same process. But this is not true. If you were to take a lot of make-up or mud, and rub it all over your face, then take a cloth and press it to your face creating a contact image, you would get an image nothing like what we see on the shroud. That is because the sides of the face and the nose would be shown, elements not present in the shroud image. Under the VP-8, the contact image looks nothing like what we see in the Shroud.

For more information on Dr. Lavoie's work, please see his website at www.shroudofjesus.com.