In 1976, two NASA jet propulsion engineers, Dr. Eric Jumper and Dr. John Jackson, experimented with a picture of the Shroud of Turin and a piece of equipment known as a VP-8 Image Analyzer. A VP-8 was used by NASA to map out the terrain of planets and stars. It basically decodes three-dimensional information (spatial information) and displays it on a monitor. When a normal photograph is placed under the VP-8 Image Analyzer, it becomes all distorted. This is because a normal photograph does not have three-dimensional or spatial information.

When Jumper and Jackson put a photograph of the Shroud under the VP-8, they expected to get a distorted image. Instead, what emerged was an incredible three-dimensional image of the man of the Shroud. This same three dimensional relief is seen with modern edging effects and BRYCE image technology. 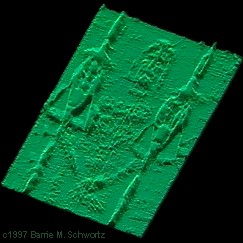 Image of a picture of the Shroud underneath the VP-8 Image Analyzer
Â©1997 Barrie M. Schwortz

Due to this new discovery of the Shroud, which was similar to Secundo Piaâ€™s experience of the Hidden image, Jumper and Jackson began to put together what would go down in history as STURP: The Shroud of Turin Research Project.

Animation of the gain values being adjusted from the face of the Shroud under the VP-8 Image Analyzer.
Â©1997 Barrie M. Schwortz