During the first part of the Shroud's history, it was seen as a novelty.  It would be shown for various occasions: weddings, coronations, etc., but interest in it wasn't very widely expressed.  It wasn't until 1898 when an amateur photographer by the name of Secondo Pia was allowed to take the first photographs of the Shroud that interest truly grew.  This was a time when photography was still very new.  Secondo Pia took a photograph of the face image on the Shroud, as he developed the negative glass plate, he expected to see a ghost-like image of the face in which he filmed.

Instead, to his surprise, what emerged from his glass plate was an incredible life-like image of a man. 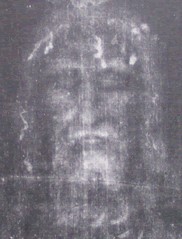 Negative picture of the face on the shroud, revealing a hidden, positive image.

This shocked him so much that he almost dropped the glass plate!  After careful thought, he realized that what we see when we look at the Shroud with our own eyes is a negative image (an image where the light values are reversed).  When he took a negative of the negative (this is a test on your math: 2 negatives = a positive [-2 x -2 = 4]) he received a positive image--an image we would expect to see from a fully developed photograph today.
This caused a lot of interest in the Shroud.  In 1931, Giuseppe Enrie was allowed to take more pictures, this time, full-body pictures.  The hidden images were so detailed that doctors and pathologists were able to do an actual medical diagnosis of the man in the shroud!