The Shroud of Turin, slightly enhanced, as seen by the natural eye.
When one first looks at the Shroud of Turin, several things become apparent:
Holes and damage due to a fire in 1532.
On December 4th, 1532, when the Shroud was kept in a French Chapel, a fire broke out.  At that time, the shroud was folded up and kept in a silver reliquary or box.  The fire got so hot that it actually melted the impure silver box, dripping some of the molten silver onto the folded cloth.  When the cloth was later unfolded, it revealed that the molten silver left a path of parallel burn marks along the cloth.  Miraculously though, almost none of the faint body image (explained further down) was damaged.    These holes from the molten silver were repaired with patches (shown in above image) that were sewn in by Poor Clare nuns in 1534.  They were removed in 2002 as part of a restoration project.

Holes in The Shroud of Turin highlighted in blue, burn marks in green.
In order to rescue the Shroud from the fire, water was immediately thrown onto the reliquary.  It was so hot that the water almost instantly evaporated, leaving calcium rings throughout the cloth's surface.

Calcium Rings from the water damage in 1532 are highlighted in blue.
What appear to be â€œBlood marks.â€
Stains that appear to be blood, though unusually bright in red color, litter this cloth's surface.

Some of the more apparent "blood marks" are highlighted in red.
A front and back body image of a man â€œlying down in deathâ€
Very faintly, one can begin to see an image of the front and the back of a man who appears to be naked, lying down in death.  This image is of a light sepia color and disappears into the background when one is any closer than 6-8 feet.

The body image (back towards on left, front on right) is highlighted in blue.
This body image is "imprinted" on the cloth as one might expect from a man wrapped in linen according to the Jewish customs. 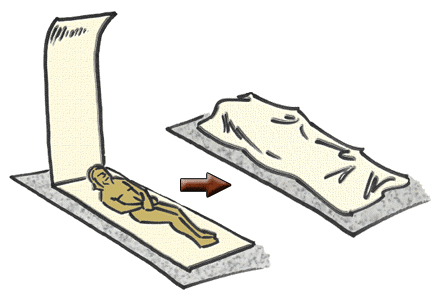 Images showing how a man would be wrapped in linen cloth corresponding to First Century Jewish customs and what we see in The Shroud of Turin.
Pictures drawn by Brandon Peat, colorized by Chris Knabenshue.